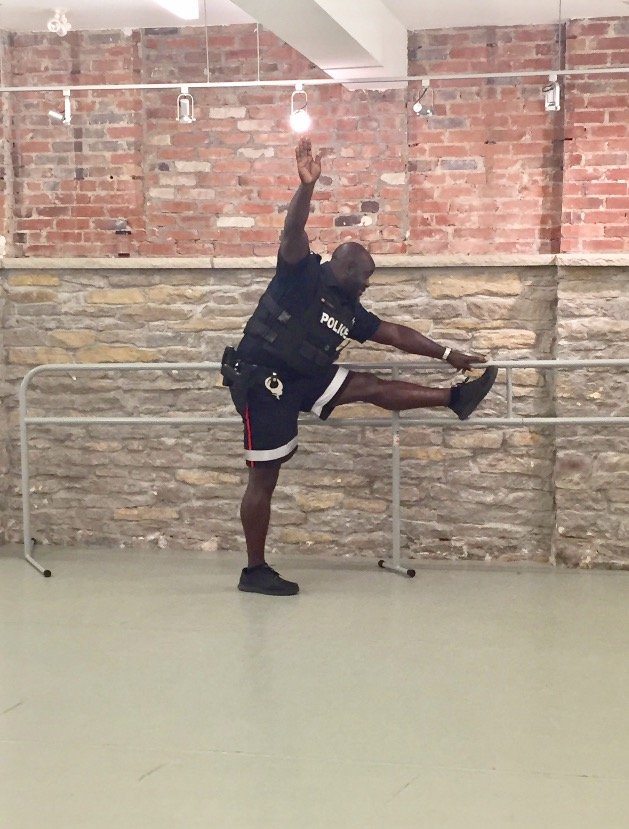 51 Division’s Constable Edward Parks limbers up for his weekly dance class with Regent Park youth at The Citadel.

When you walk into The Citadel, the last thing you might think you’ll see is a 6’3” police officer stretching at the barre, but these days, that sight is a weekly occurrence.

“It’s been hugely successful,” says Constable Parks, saying how exciting it’s been to work with youth, aged 11-16, on putting choreography together and working on their moves. And, Parks says, the classes at The Citadel has also brought together kids who might not have known each other before. “They’re building new relationships in their community,” he says.

The youth and officers are working with four different choreographers this year and hope to get to perform in STOMP Urban Dance Competition and Showcase – the largest youth initiative developed by Toronto’s Parks, Forestry and Recreation in which youth perform at a yearly performance at the Sony Centre.

As the Proaction program brings together police officers and kids, creating an environment of mutual understanding and respect, the officers join the youth in the dance classes. These connections between police and kids are made with a view to increasing community safety while supporting young people to reach their full potential. “It’s important for the kids to see us as members of the community, not just as officers,” says Parks.

So, what’s been the hardest part for Constable Parks? “As you get older, it’s just not as easy anymore,” he laughs, but insists he still “has moves.”

The Citadel: Ross Centre for Dance is proud to support neighbourhood initiatives like this one. If you, or anyone you know is interested in participating, please contact Constable Edward Parks at: Edward.Parks@torontopolice.on.ca; Constable Melissa Huntley at Melissa.Huntley@torontopolice.on.ca, or call 416-464-2419.