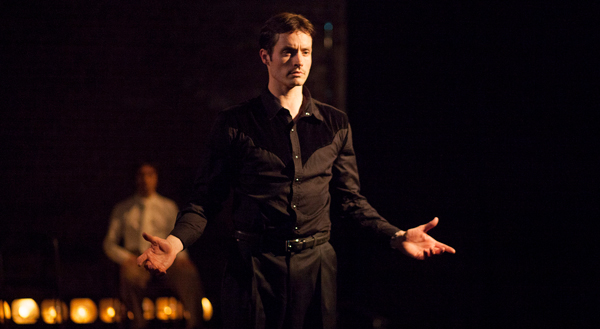 1. How do you feel about performing in these two works that are so beloved by audiences?

This is a dream show for me. Having danced in the very first version of Looking for Elvis that Laurence created for another company in 2013, I feel very close to the work. Hearing her speak about her trip to Graceland and being inspired by Elvis Presley gave me so much more information about him than I ever had. The piece has since evolved into an exploration of what it means to be a performer, using Elvis as a vessel for expressing that. It is journey that is different and exciting each time, which I am always happy to go on.

The Man in Black is raw and gritty and has always felt like a chance to unleash my alter ego. From the time I was a child I wished I could be a badass cowboy! We have performed the piece so much and the four of us are so comfortable with each other. For me it’s all about conflict, love and coming together – the way a family does.

2. Can you describe what it is like to dance to the music of Elvis Presley and Johnny Cash – and how it differs from performing other contemporary work?

What’s interesting about Elvis is that we are not only dancing to his music but also to the sound of his voice in interviews. He speaks candidly about his life and the music business and we react to his words. The music is spirited and soulful but a lot of my favourite moments happen while he is just speaking. All of the Johnny Cash songs we dance to are covers by other artists that he recorded late in his career. To me, it sounds like he’s had a long day and he’s about three whiskeys in. There’s a lot of weight to his voice and this deep passion for the music. It influences the spirit with which we dance. The best way to describe it is with a deep, low grunt.

In contemporary dance, at least in my experience, we rarely perform to music that has words. For both pieces, I make a real effort to listen to each word and try to allow them to effect how I approach the movement. After four years, I’m still finding new ways to interpret moments in each piece.

3. What is your favourite moment when dancing in Looking For Elvis or The Man in Black?

There are so many favourite moments, but in Looking for Elvis, it’s the end of what we call the “heartache section.” We have all been doing different things, for the most part in our own worlds and Elvis stops singing and starts talking while the guitar is still playing. It’s like the moment gets disrupted and one by one; everyone gathers around me and we become this little pack. I get to look each person in the eyes for a second while they walk up to me and that shared connection is the whole reason why I dance. Cheesy, I know!

As for The Man in Black, it happens during the fifth song of the piece. All four of us are connected like a chain and what’s happening is a little uncomfortable for the audience to watch. At that point we are so tired and our legs are ready to give up. I can feel the energy of the other three and knowing that we’re all in it together is intense and so powerful. It gives me the final push I need to keep going. 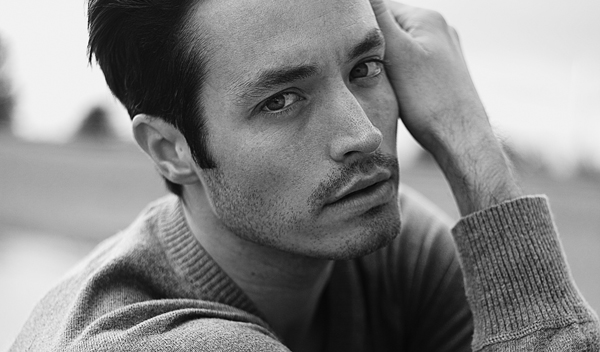 4. What do you think the influence and impact these two artists had/continue to have on the art form of dance?

It’s funny, I never would have expected that music by either of these artists would have inspired contemporary dance. Having performed to their music so much, I think the purity of their voices and the fact that the songs aren’t over produced the way a lot of music is these days translates to our movement. The audience definitely feels that and responds to it positively.

5. How has your involvement in these works changed your perspective of the artists?

I feel like I’ve gotten to know a lot more about Elvis Presley as a person, mostly because Laurence did so much research on his life that she wanted us to know about. It’s refreshing to learn personal details about someone who’s such an icon and realize that behind that big persona he was a simple family man who just wanted to share his love of music. As for Johnny Cash, I didn’t know much about his music at all before dancing this piece. Now I’m a big fan of his powerful voice.

6. What is your favourite Elvis Presley and Johnny Cash song?

It’s hard to pick just one song by Elvis from the piece, so I’ll say it’s a tie between the opening song and the closing song. The first is called “My Happiness.” It makes me smile and performing the task that is asked of us at that time makes it even more special to me. The other song is “Can’t Help Falling in Love,” for obvious reasons. Who doesn’t love that song?!

My favourite Cash song from the piece is hands down, “Hurt.” Originally performed by Nine Inch Nails, it has that hard rock power ballad sound to it with all the subtleties an experienced artist like Johnny Cash brings to the table.